Considered a major force in the modern revival of the clavichord and fortepiano, Joan Benson is one of the foremost clavichordists of modern times. A leading pioneer in promoting the clavichord as a concert instrument, she is a master at expressing a wide range of emotions through subtle and sudden variations in dynamics.

With her highly praised concerts and recordings, Benson revived clavichord music dating from the 15th through the 18th century. She is particularly acclaimed for her approach to the improvisational free fantasias of Wilhelm Friedemann and Carl Philipp Emanuel Bach. In time, she applied her clavichord technique to the early and modern piano, playing repertoire from Haydn through Fanny Mendelssohn to John Cage.

Benson appeared in many prestigious venues around the world, such as the Rothschild Palace in Paris, Haydn’s home in Vienna and the Metropolitan Museum in New York. Above all, she enjoyed performing on the finest clavichords and fortepianos of the major instrument museums in Europe and the United States.

Over the decades, Benson introduced the clavichord to countries of the Middle and Far East. Wherever she toured, she took time to absorb and adapt to the environment. For example, her performance on Indonesian national television reflected the rhythmic intensity of Balinese gamelan artists. Consequently, there was a life in her concerts that made them never the same but always complete and fulfilling.

Benson stimulated clavichord interest with her concerts and master classes at many major universities, colleges and conservatories across America and worldwide. Her articles have appeared in international journals, and as a faculty member at Stanford University and the University of Oregon, she inspired generations of early keyboard players. 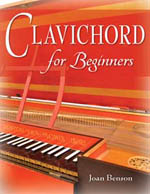 This book offers, for the first time, important beginning exercises and lessons for the potential clavichordist. It also provides a vibrant portrait of a clavichord pioneer who takes us from sixteenth-century keyboard masters to the frontiers of electronic music research. The book includes a CD of Benson’s acclaimed performances from 1962 to 2000, engineered by Barry Phillips, Grammy award winner. An additional DVD shows Benson as an inspiring teacher.

According Paul Badura-Skoda, “Clavichord for Beginners is the product of lifelong dedication and research by the world’s leading expert on clavichord playing and teaching. This amazing book offers a wealth of information not only for beginners, but also for experienced music lovers.”